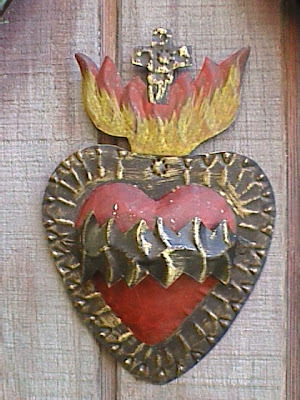 Can a heart really feel like this? This being, of course, a rhetorical question and not requiring an answer...as if there is an answer. This symbol has become very popular in certain circles and I am curious as to why. Maybe it is that both the tightly wound barbed wire and the flames seem to be very accurate descriptions of what the heart communicates to the mind. Or should I say, tries to communicate to the mind. The tricky part is what the mind does with this information. Depending on how much compulsion we add in, we can run in circles with the despair of a situation and wallow...or...we can very easily decide on another course of action. It is hard sometimes to accept the fact that we cannot go back in time and change something we said or did. Who am I kidding? It is just torture that we cannot do this. The heart wants to hold on to the grudge and the blame and keep it close, and doesn't want to listen to reason. Like a family feud that has been going on for so long no one can even remember what it's about. Listen to your heart or listen to your head? Sometimes I wish they would just try to get along.
Posted by Cowgirl at 17:39

The pragmatic me sees the barbed wire as the pericardium, the tense sac in which the heart resides. The flames is the conduction system, the SA node, the AV node, the Purkinje system, thru which the electrical impulses scatter.

The romantic me sees the passion of forbidden love constrained.

That is a very cool art piece of "The Sacred Heart". Who made it? I like it. One can muse on this... unless of course you already knew... Hope all is well in the soon to be Great White North! :)

The Sacred Heart of Jesus is today one of the most recognizable symbols of the Catholic faith. The image originated in France near the end of the seventeenth century when a nun named Marguerite Marie Alacoque (Often anglicized to Mary-Margaret) began to publicize her mystical visions of Jesus, who admonished her to devote herself and the country to the veneration of his heart, which she described the heart as the center of communication between humans and the Divine. St. Mary-Margaret's vision, of a heart entwined with thorns and flames, sprouting a cross from the top, was drawn from the visions of earlier mystics, and possibly from alchemical imagery common at the time.

A few decades after the Saint's death, the the bishop of Marseille, Monseigneur de Belsunce, consecrated his diocese to the Sacred Heart in an effort to spare the region from plague. The plague passed over Marseille, and the symbol became very popular, associated with acts of charity and piety and used as a charm against plague. Today, to devote oneself to veneration of the Sacred Heart is to in effect make the heart of Christ one's own- to create within oneself the love and compassion of Christ- in essence, to be Christ-like.

Girl... you opened the door.... again.. you must just want me to do SOMETHING on the internet...who has time to blog??

The picture is really powerful...and symbolic... Don't we all struggle with it (what it represents) everyday? What you said G... it's true... why can't they get along???? They're so different, so completely different.

"For the Word of God is living and powerful and sharper than any two-edged sword, piercing even to the dividing apart of soul (the mind)and spirit (the heart), and of the joints and marrow (the joints represent the 'physicality' or the the tangible, the marrow represents the life force,or the intangible, things or changes that allow or alter the life/the tangible), the discerner of the thoughts (the mind/soul) and intents of the heart(the heart/spirit)".

"Who am I?" Ah, that great question...You have to figure it all out... that's it.. The question, well that is the answer.

My heart is smiling... my mind... it always (always-underlined) struggles... yet still, my Spirit is free. That's where faith comes in. You did tell me to share more of myself, didn't you? : )

You do know how very much I love you. Always.