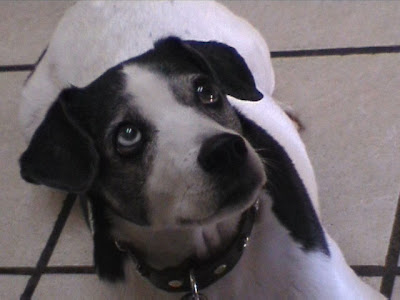 It never surprises me how callous some people are. You never can tell just by appearances alone. They look 'normal' and can even be polite but then they do the most shocking thing. I was out at one of our local animal shelters yesterday. It is the one that takes 'owner relinquished' pets only. Somehow just that term is so, so sad isn't it? Of course, I suppose even I can imagine very extenuating circumstances when that would be the ONLY solution but really...most of the dogs here (and the cats too) arrive with the most flimsy of excuses from their people. The woman who runs the place and does almost everything, all the time, takes these pups in on a regular basis. She does so with few questions as to 'why' but with a few more about the personality and health of the animal being left. Her goal being to find a better, a real, a permanent home for these unwanted beings. So yesterday I happened to get there at the same time a sweet, 3-year old dog was being left by her 'owner' ('moving and new place doesn't allow dogs' you be the judge ). After filling out the paperwork, he said a quick good-bye and was out the door...and to think he looked like a nice guy. I was stunned, as was the dog. Well, we loved the shell-shocked dog up a little bit and calmed her down and then she was led back to the kennels, to wait. She was devastated and it would take some time for her to be okay again. I cannot help but think how under no circumstances would I have ever given Cowgirl up, willingly. I would have lived on the street before I would have moved somewhere without her. I would feed her before I fed myself. She was considered in every equation. When I sighed on with her it was for life. Even in death, I won't 'relinquish'. Reality bites.
Posted by Cowgirl at 10:11

People shouldn't be allowed to own pets unless they've first taken a course in how to care for it, and acquired a certificate of completion... something like a driver's license. I always say that, because honestly,I worry about a lot of people's sweet pets when I see how their owners behave.

I agree with you, NOTHING would make me give up my boy. NOTHING! I had to move before, and I looked for 3 months and ended up finding a dinky little place, but that was fine, because it allowed me to have my pup. I'd do anything for him. I always joke how he eats better than I do at times when things are rough, but so be it. He's my responsibility and I made a promise when I took him in. I'd give the shirt of my back ... Some people just shouldn't be allowed to have pets!

On the other hand, this dog is probably better off. The owner had no connection with the dog. Dogs sense that, and despite trying their hardest, dogs can't make an owner a good one. Hopefully, the relinquished pet will be in a better place soon.

Reality... Bites BIG... ask Chica... Today Rick asked if I thought she was starting to understand...right now, she's laying next to him on the couch, being very "owned". It took her some time to come around to figure out that she had a "home", that she had "people". Encourage others to be those "people" that the little, unspoken, furry, 4 legged's need. Be their people.

Since being a part of the "Good Sam" club we receive their "Highways" magazine. In the latest issue was an article about a man noticing a stray dog in a campground he was visiting. He befriended the dog and then left on his merry way. All the while the image and well being of the dog played hard on his heart. He went back to the campground and took the dog in as his own. And now for the past 3 years he's been running a kennel for stray animals! Tiz awesome when good things like this happen! God is good ALL the time... even if WE choose not to realize it!

A big part of the reason I ended up living with family after being in my own apartment for over 10 years is because I couldn't find a dog friendly (let alone pit bull friendly) apartment when time came to leave the one I was in.

Even now, without Indiana, I REFUSE to pay for an apartment that: doesn't allow dogs, dogs are "negotiable", or have a pit-bull ban.

I'm really aiming for my home ownership and even then I'll have the same trouble shopping for insurance.

"Love me love my dog" that's what I've always said. It's a package deal. Death has been the first thing to come close to separating us.

Plutarch, the Greek philosopher wrote thousands of years ago: "A good man,will take care of his horses and dogs, not only while they are young, but when old and past service. We ought certainly not to treat living beings like shoes and household goods, which, when no longer useful,we throw away."

Oh, my Gina, that's so sad to witness...just reading it brougth tears to my eyes!
I agree in full with Mareike,anyone wanting to adopt or aquire a dog should go through a course and a test to qualify. And once there is a history of neglect (relinquishing an animal for a lame excuse of housing, IS neglect) that person should not be allowed to own a pet any longer, unless can prove a deep personal change.

"The greatness of a nation and its moral progress can be judged by the way its animals are treated." - Mahatma Gandhi, Indian Statesman and Philosopher