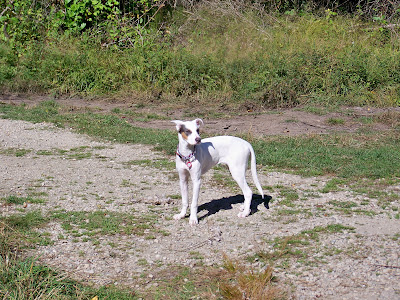 A friend sent me this picture of the PonyGirl posing at Kokanee Provincial Park just recently. She looks far more distinguished than she actually is. She also looks less 'starving poster puppy' than she actually is. This dog seems to be able to eat as much as she wants and doesn't gain any weight. Perhaps we should make her the subject of a study. She obviously has some mutant gene that devours all excess calories and any fat that is consumed. We are calling her 'boney-maroney' and 'skinny-bilink' . Yes, she is being fed lots of good, homemade foods. Lots of protein, calcium-rich foods, fruits & vegetables. The fruits are of her own choosing whenever we are out walking as there are lots of apples, pears and plums still around. A recent discovery of hers has been learning to crack open walnuts and hazelnuts. This town has become an all-you-can-eat buffet. She seems healthy and happy. Big smile.
Posted by Cowgirl at 09:54

Hey!! where's that puppy's other leg?
You're right about the sidewalk buffets Gee.
I have never seen so many fat pigeons. Some even to fat to fly, if the amount of flattened feathers on the street is any indication.
When are we going to get a nickname for the canine compannion?
Ponygirl is quite a breathful isn't it.
How about P.G.for parental guidance recommended.
Or Pee Gee come home.
Or just Peedge.
Not trying to solicit any contributions to your blog Gee, but perhaps your faithful followers might enjoy contributing to the compacting of our favorite orphaned critter's nom de plum.
You've brought us with you this far, perhaps her nickname could be something we could all enjoy. for good or bad, it would seem we all have a vested interest at this point.
Hey!! how about a contest.

If you don't already know this, pit bulls can take a lot longer to "fill out" than other dogs. They can take up to 19 months to properly fill out. At least that's what I have read. When I first got Indiana, she was a mild 40-some pounds with a tiny head and small chest. She never got massive, but reached 50 pounds of muscle slowly over the following year. So if PonyGirl is ever going to get any bigger, it may just take a while.

As long as she's happy and healthy!!!

She looks just fine. She can be on a poster for skinny dogs with Ben Dover anytime. He only weighs 50-55 lbs. He thinks he's a pony, though, racing from one side of the farm to the other. Maybe I should change his name to "pony boy". Unlike you,however, after shoveling horse crap, I NEVER wanted a pony. . . .

She IS magnificent. She IS regal. She IS Ponygirl. Everything's a little better with a little Pony to share it with.

Hugs for your SoDak Ponygirl.

Love you AND your Pony.

If you can figure out the secret to staying skinny you;ll be rich!:)