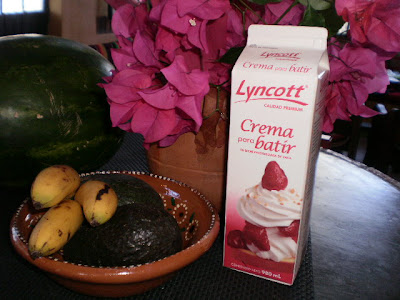 ...let me 'splain. So it seems everytime I spend time in Mexico I end up searching for creme/crema/cream for my coffee. People! I do not see the point of coffee without cream. Seriously, I would quit coffee in an irregular heartbeat, if I couldn't have it con crema.
That used to mean, in the early mexican days (mucho moons ago), doing without cream (ie without coffee) and thus being very cranky for about a week into the holiday. Mostly it was the insufferable headache and the cold-turkey withdrawal from that morning java jolt that caused my misery. The headachey week was always spent searching in every tienda, in every pueblo, for the elusive crema. Yes, "hello my name is Gina and I am an addict...". I would be met with openly puzzled stares when asking for this product because apparently the concept of adding it to cafe in Mexico was unheard of. Stupid gringa.
I mostly always got pointed to the enchilada crema and yes, I did try it in my coffee (several times) and no it didn't work....it separated into an oily, greasy mess.
There were several other white, viscous and solid concoctions that I tried over the years as well....all complete failures.
What I am saying is that for years I was always in Mexico in an altered state of consciousness one way or another, UNTIL....the appearance of WAL-MART in Mexico. Okay, at first I hated it...hated it...hated it....until the news got out that the evil - Mexican WAL carried real cream !!!! The proper name being: crema para batir....cream for whipping.
In the name of the father and the son and crema para batir.
What a thrilling discovery . I hightailed it out of my NA meeting and hitched a ride to the evil - WAL and gazed upon the cold case filled, FILLED, I tell you, FILLED with litres of crema para batir.
Although it is easier to find nowadays as not only the evil - WAL carries it but also the MEGA store which eases my conscious somewhat because that is a mexican store chain at least. But inevitably what happens is that I end up no where near these big stores when I run out of my sacred crema. So I hit all the little tiendas, all of them, and pathetically ask in each
"tienes crema para batir ?"
It becomes my very own Groundhog Day (you know... the movie).
As I find myself being led back to where the enchilada crema is, my head starts hurting. OWwwwww. 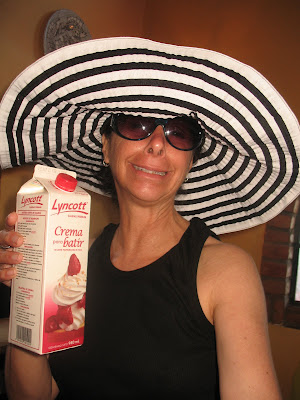 You are one crazy crema dona!! I should have mine posted soon!

I am with you all the way chica! No crema, no coffee. HOW do peeps drink it black?

LOVE the hat. It makes the "Dona" in the Crema Prima Dona.

Love you, mean it.

Oh man I feel ya! I need my coffee or I suffer the headaches!
And I've been out camping sometimes where I've remembered the coffee, the sugar packets, but not creamer! Agony!! Pure Agony! I need my coffee!!!
Great little story! thanks.